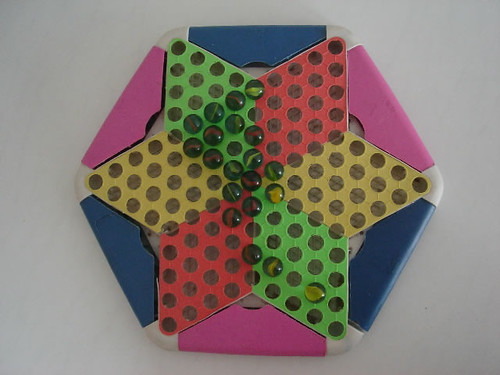 My family went to my father’s hometown for Chinese New Year. On the night before we left, we played a fascinating game of Chinese checkers.

Number of players
Chinese checkers may be played by 2, 3, 4 or 6 players.

Game board
The Chinese checkers board is shaped like a star with 6 points. Each player starts the game with 10 marbles filling all 10 spaces in their point of the star. This is their home point. The color of the player’s marbles matches the color of their home point. Sometimes pegs or other types of playing pieces are used instead of marbles.
When 2 players play, they set up in points opposite each other. When 3 play, one empty point is left between each player. When 4 play, each player must be directly opposite an opponent. Five players cannot play since the game will not be balanced. That is, one player would be opposite an empty point.

Object
The object of the game is to move all your marbles into the point of the star directly opposite your home point. The player that does this first is the winner.

Starting the game
Players decide among themselves who will start. When only two players are playing, players may flip a coin to decide who starts. Players take turns, clockwise.

Moving and jumping
The player may move one marble to any adjacent space. Or the player may jump over an adjacent marble to the space immediately past that marble. A player may make as many consecutive jumps during the same play as is possible. Marbles may be moved in any direction. The player can jump over any colored marble.
Unlike checkers, players do not capture a marble when they jump over it. Nothing happens to the marble that was jumped over. No marbles are removed from the board during the game.
Once a marble has entered the destination point, that is, the point directly opposite the home point, it may not be moved out of that point. It can only move within that point.

Now, this is a game of Chinese checkers I have never played before because it is the first time I had ever played with five players (me, my mom, my dad, and my aunt, and another aunt), which is the maximum number of players the game could hold.

So, we started the game. At first, I was happily playing because wow… there were so many pegs for me to jump over to the finishing point. There were happy jumping times for other players, too. But soon, as the game went on, everyone’s pegs were stuck, in the middle of the 6-point star. We can barely move as our pegs are blocked.

It took some time before the pegs were free again.

One of my aunts was almost winning. But as we played. I soon found some paths, which made me the winner (my aunt was in the second place).

My father was going to beat my mother at that time. There seem to be no way for my mother to beat my father, but then, my mother realized that she actually could beat him!

Sometimes, you feel that life is so easy and you are very happy; everything is so perfect for you. But sometimes, you are ‘stuck-in-a-traffic-jam’ and it seems that there is no way out and there are a lot of obstacles. But as you go on, you would find a way out of the ‘traffic jam’, and become happy again.

Moral is, never lose hope, even when it seems that there is no way out. If you go on, there would be a way.

P.S. The game lasted for about 2 hours. Time flies when you are having fun.